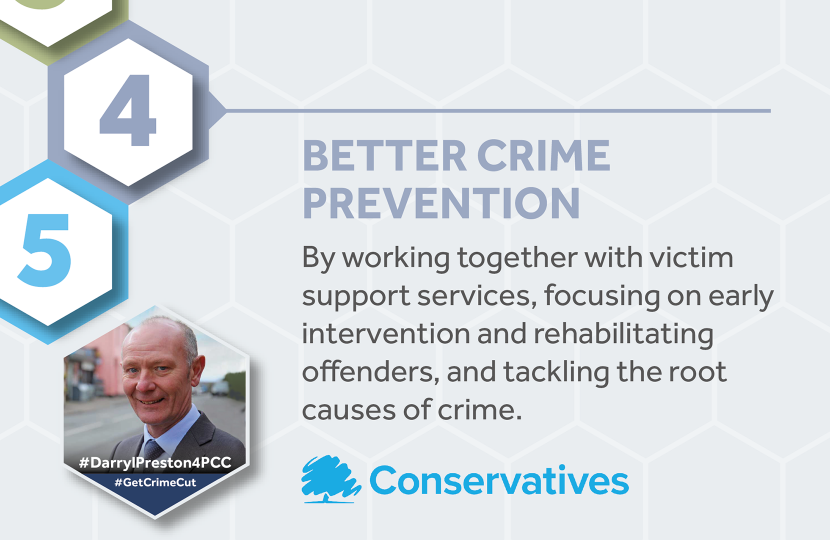 By working together with victim support services, focusing on early intervention and rehabilitating offenders and tackling the root causes of crime.

As a young, uniformed frontline police officer in London, I took pride in being a ‘crime fighter’. I knew most of the criminals on my patch in west London and would make regular arrests for burglary, drugs, robbery and car theft.

This continued when I transferred to Cambridge in 1998.

I had a slightly different uniform, but the same job with the same inherent issues impacting communities. I had always understood prevention was better than cure, but largely saw my job as catching criminals.

I recall, when working in Cambridge, there was a prolific burglar, 12 years old and a one-person crime wave.

In the early hours of one morning and following a burglary, I went to his address to ‘enquire his whereabouts’. He was asleep on the stairs. He had no bed, no food in the house, a single incapable parent who used drugs and younger siblings who would no doubt be tomorrow’s generation of criminals.

Shortly after, and now a CID officer, I worked in the child protection team in Cambridge and would often be dealing with children at significant risk of harm through abuse and neglect – and quite often the same kids as the burglar asleep on the stairs.

A voice for victims

Burglary continues to be a major problem in our county.

My point is this: I did then, and still do, believe victims need a champion – which I will be.

Burglary is a particularly nasty and impactive crime, a violation of our home, precious family belongings are forever taken away from us and a sense of not being safe in the one place we should be.

I know this because I have dealt with many burglaries as a police officer and have been a victim myself, a couple of days following the birth of my son when we were all asleep upstairs.

The police did their job and caught the criminal who burgled my house and I was grateful, though this was small compensation as the damage had been done. Prevention would have been far better for all.

As for the burglar asleep on the stairs, well I arrested him and he eventually went to a young offenders institute only to be released shortly afterwards. He went on to being a one-person crime wave.

And now? Well, he is a career criminal, having cost us all by the crimes he has committed and the expense of the criminal justice system, probably hundreds of thousands of pounds of tax payers money.

But, had there been effective early intervention, there would be less victims of burglary, a young child may have flourished and we would have saved a lot of money.

It is for the Police and Crime Commissioner to show strong leadership to make this happen, using convening powers to bring partners to the table and embedding good practice to cut crime.

From early intervention initiatives for those who may start out on a life of crime tackling the root causes, rehabilitation of offenders to stop the spiral of offending to target hardening and designing out crime in our cities, towns and villages.

If elected in May, I will show that strong leadership – and:

1.  Ensure effective crime prevention strategies are in place across Cambridgeshire and Peterborough.

3.  Invest in local crime prevention initiatives which are proven to reduce crime.

Back in the day Darryl Preston was a uniformed serving officer in the Met and Cambridgeshire. 'I had always understood prevention was better than cure, but largely saw my job as catching criminals,' he writes.

'After my experience as a police officer, I realise just how important prevention is to individuals and society as a whole.

'It is for the Police and Crime Commissioner to show strong leadership in being a voice for victims and in making crime prevention a successful policy in Cambridgeshire and Peterborough.'