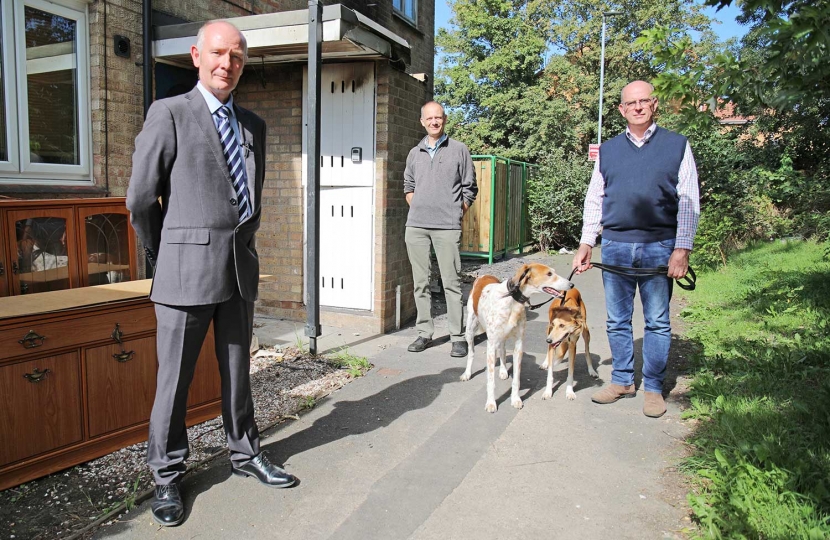 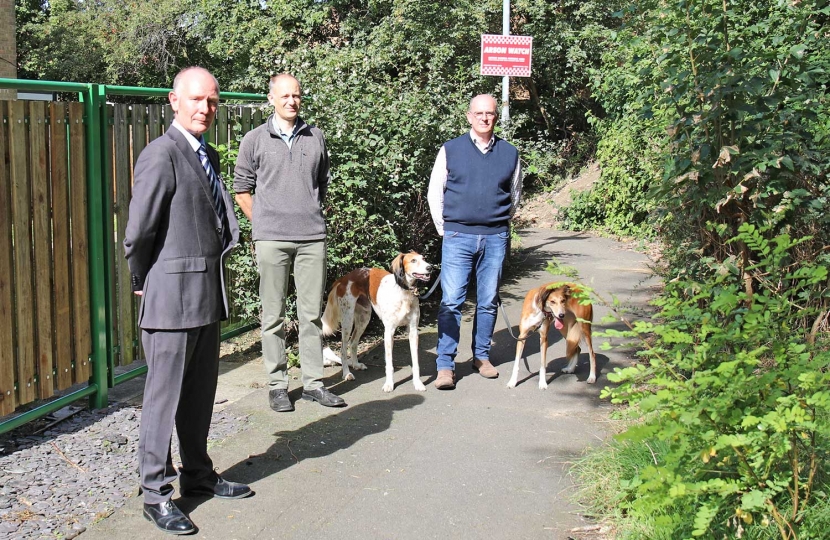 "I'm at The Dell with Andy Coles, a councillor for Fletton and Woodston ward on Peterborough City Council – The Dell in his ward, which is south of the city centre.

"This time one of the flats was being renovated and, fortunately, empty – but the second one had been occupied by an elderly person: had they been in, the fire damage and the smoke would have no doubt taken their life.  It was an extremely dangerous and potentially a fatal fire."

"After the fire I spent time here with fire officers, colleagues from the council and council enforcement officers to access what had happened and what could be done to prevent more fires.

"I made some proposals, having spoken to a number of the residents – common sense ideas which can be used in any situation similar to this:

"Cross Keys Homes, which owns the properties, acted quickly and created a new storage area for the bins – but the heavy undergrowth on the green patch, owned by the council, has not been cut back yet."

"And now I see there is what amounts to fly tipping of flammable old furniture right outside the flats – despite an 'Arson Watch' sign a few yards away.

"I feel the key to making areas like this safer is for the different agencies to work together, which so far this hasn't happened.

"Darryl – what would you be doing to get everyone, including the community safety partnerships, to do their job?  I want to reassure residents they are going to resolve this particular problem."

"First of all, thank goodness the flats were empty.

"But the police can't do this on their own – it needs a joined up, multi-agency approach.

"Within the PCC legislation, Police and Crime Commissioners have what are called convening powers to bring together all the different agencies to look at local solutions to local problems.

"So I would make sure the community safety partnerships throughout Peterborough and Cambridgeshire are strengthened and supported by making funds available."

Everyone should feel safe

"And we also need to learn the lessons from where they're working well so it works well everywhere.

"All of our communities should feel assured they can be safe where they are, particularly in their own homes."

Darryl Preston, left, with Andrew Willey and Councillor Andy Coles outside two arsoned flats in The Dell, Fletton and Woodston ward, Peterborough.  Signs of the fires – which could have had fatal consequences – can be seen behind Darryl, along with piles of flammable furniture that appeared to have been dumped there.

Second photo:  Behind Darryl is the new secure area for wheelie bins (bins are often used to start a fire); in front of them is the overgrown patch of ground where arsonists can hide to see what happens.  On the lamppost behind Andy is an 'Arson Watch' notice.