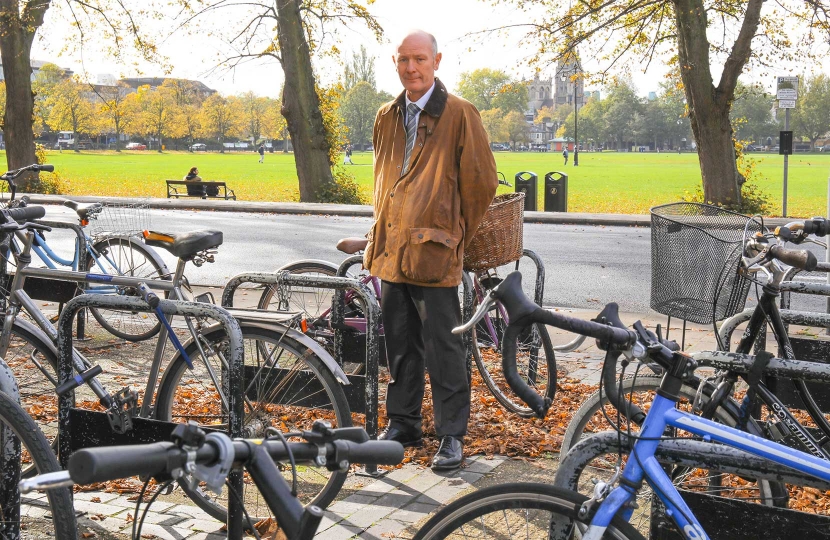 My family has been the victim of bike theft – two have been stolen in the past year from our local railway station. The bikes were locked and left unattended at the station cycle racks.

The impact of this crime should not be underestimated.

In my case, both bikes belonged to my son, a sixth form student. Obviously there is the financial impact: around £200 each in my case.

But they were his only method of transport, going to college and part time job, to the gym and meeting friends.

And there is something else – the bikes were given as birthday gifts, they had sentimental value, only to be stolen by callous criminals.

Bike theft has, sadly, increased in recent years and, as Camcycle as reported last August, it is estimated to cost Cambridgeshire at least £1.5 million a year.

Indeed, our county is one of the worst impacted by this crime.

While in part it’s because of the significant amount of crime in Cambridge city, it is all too prevalent everywhere and this is unacceptable, as my case shows.

I used to catch ‘em

As an ex police officer having worked in Cambridge city, and many years ago targeted bike thieves, I am well aware of the motivations to steal bikes.

Yes some may be opportunists, but most is organised criminality often carried out to fuel the drugs trade with ‘handlers’ making significant ill-gotten gains.

Use the Bike Register

I am a strong advocate for preventing crime from happening in the first place – there is much that can be done to protect one’s property.

In my case, yes, we should have had better locks and the bikes should have been registered on the national database – and, of course, reported to the police.

But our local station’s cycle park could have been more secure (a point made by Camcycle about Cambridge station).

Root cause of criminality needs addressing

I am in no doubt the root causes of people entering into a life of crime needs to be addressed, along with the rehabilitation of offenders.

However, I am also a strong advocate of robust law enforcement.

Those who choose to steal bikes and make profit from these crimes need to fear being caught and punishments need to act as a deterrent.

Bike crime should be targeted

Where this is a priority for local communities, the police and other partners need to be supported and target bike crime – particularly the ‘handlers’ – with courts handing out significant sentences and confiscating their illicit assets.

I fully support the use of Criminal Behaviours Orders when thieves are caught, preventing them from entering certain areas and having to prove a bike is theirs.

Furthermore, to bust this illicit business we need to stop the trade in stolen bikes, making it more difficult for criminals to sell on ‘online platforms’ or via shady dealers.

We also need to remind buyers of the perils of buying stolen bikes – a possible criminal offence and confiscation.

I also believe most of us accept the police must prioritise the most harmful crime types. The police cannot ‘arrest their way out’ of the scourge of bike theft.

A coherent joined up approach is needed with strong leadership to cut bike theft.

If elected in May, I will show strong leadership by:

3.  Supporting the police in targeting criminals, using all the tools at their disposal and making funds available for ‘bait bikes’.

4.  Investing in evidence based preventative initiatives to cut bike crime.

5.  Hold the Chief Constable to account in cutting bike theft.

Tory PPC candidate Darryl Preston’s eldest son has had two locked bikes stolen from outside his local railway station. “As a sixth form student, this has impacted on his only method of transport – going to college and part time job, to the gym and meeting friends,” says Darryl.

“With the sheer number of bikes being stolen across Cambridgeshire and Peterborough, it is evident that more needs to be done to combat bike thefts.

“If elected, I will make resources available to the Chief Constable to recruit many more frontline / neighbourhood police officers and detectives to crack down on the scourge of bike theft.”