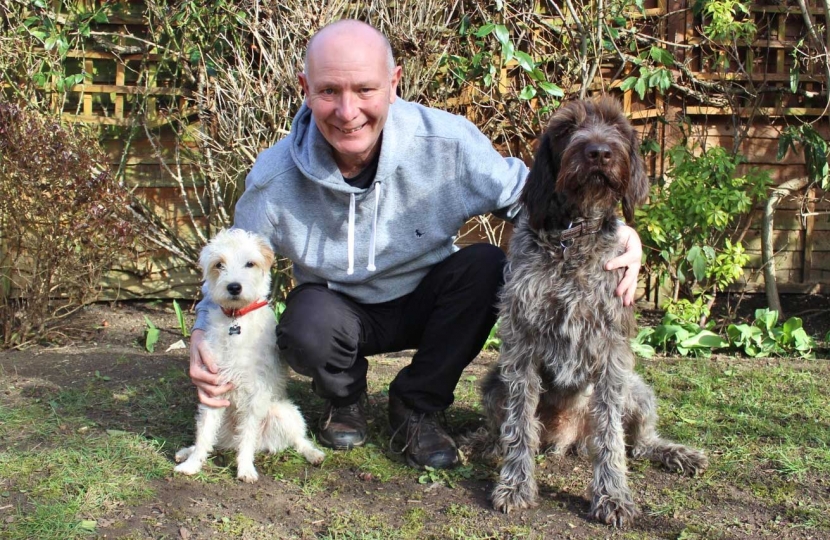 There's been a spike in dog thefts throughout the country — very sad for the owners and all created by a rise in the value of dogs thanks to the Covid pandemic.

Stopping dog thefts and catching the criminals responsible is part of Darryl Preston's plan to #GetCrimeCut in Cambridgeshire and Peterborough.

“Any dog owner knows the real and intense pain felt when their pet is injured, dies or is stolen,” says Darryl Preston.

“This is not surprising given a survey found that 90% of respondents considered their pets to be a family member,” he added.*

“And while the government has already increased sentences for those who mistreat animals and has tackled puppy farming through ‘Lucy’s Law’, it now needs to toughen up the law on dog thefts.

“It’s done so with Finn’s Law, which ensures police dogs (and horses) are viewed as the living, breathing, sentient beings they are, leading to more severe punishment – up to five years imprisonment – for their attackers.

“If elected in May, I will work with our local MPs, Kit Malthouse, the Policing Minister and Priti Patel, the Home Secretary who has spoken out on this issue, to change sentencing guidelines to ensure our judicial system recognises the emotional and social value of our pets, so tougher sentences can be applied in our courts.”

Dognapping is a criminal activity

During the Covid pandemic, dog ownership has risen significantly along with the cost and value of ‘man’s best friend’ as so-called 'dognappers' – who are common criminals – have recognised:

Because punishments are often related to the monetary value of a dog, they usually result in trivial fines rather than imprisonment.

Dog theft should be a high risk activity

“Although the Theft Act of 1968 allows a maximum penalty of up to seven years imprisonment, this never seems to happen,” said Darryl. “This makes dog theft ‘low risk / high reward’, attracting organised criminals who operate across police force boundaries.

“Dog theft is a criminal menace. If elected, my PCC leadership will be one of targeting criminals, informing the public and working closely with the Chief Constable and government to give the people of Cambridgeshire and Peterborough the security they – and in this case, their pets – deserve,” he said.

“And because, like drug dealing, this is a regional problem, I already have approval from the Conservative PCC candidates in Bedfordshire and Hertfordshire for my plan and I’ll be lobbying local MPs to ensure that the sentence given to dognappers reflects the severity of the crime.

My plan to combat dog thefts is:

1.  Work with our local MPs, the Policing Minister and the Home Secretary to change sentencing guidelines to ensure our judicial system recognises the emotional and social value of our pets, so tougher sentences can be applied in our courts.

2.  Recruit more police officers to enable the Chief Constable to investigate and target the organised crime groups which steal dogs.

4.  Improve public awareness of how to reduce their pet’s vulnerability to criminals, and to prevent others from buying stolen animals and fuelling this terrible trade.

Cambridgeshire police say there are some simple things pet owners can do to prevent their theft and keep them safe:

In addition, prevent theft on walks by varying walk times and locations and being suspicious of strangers who ask questions about your dog. Make a note of any suspicious, loitering vehicles.

If your dog is lost or suspected to have been stolen, it’s important to act quickly.

Survey found 90% of respondents considered their pets to be a family member.

The Kennel Club reporting over half of dogs are stolen from back gardens.

Darryl Preston with his two dogs. “Dog theft is a criminal menace,” he says.

“If elected to the role of PCC, I will be working closely with the Chief Constable to target criminals so everyone Cambridgeshire and Peterborough has the security they – and in this case, their pets – deserve,” he said.

Darryl is the Conservative candidate in the Cambridgeshire and Peterborough Police and Crime Commissioner election in May 2021.